We successfully advocated to secure $ 5 million in initial appropriations funding for the Upper Ohio Engineering & Design Work, following last year's passage of the Water Infrastructure Improvements for the Nation (WIIN) Act. The passage of the WIIN Act was made possible by working closely with partners like the Port of Pittsburgh Commission and the Great Lakes Metro Chambers Coalition.

As a member of the Great Lakes Metro Chambers Coalition (GLMCC), we worked to advance key provisions in the Tax Cuts and Jobs Act, which was signed into law at the end of 2017. The GLMCC supported the following provisions, which were all included in the final package:

As a member of the Business for Federal Research Funding Coalition, we advocated for robust support for federal research funding in 2017. We joined with research institutions and innovators in this nation-wide coalition of chambers to say business supports and recognizes the importance of research and the economic benefits it brings. Congressional leaders joined in bipartisan support for this investment. In fact, the National Institutes of Health received an additional $2 billion in research funding and the National Energy Technology Laboratory received a $36 million increase in the 2017 omnibus bill. Read GPCC President Matt Smith's column in the Pittsburgh Business Times here. 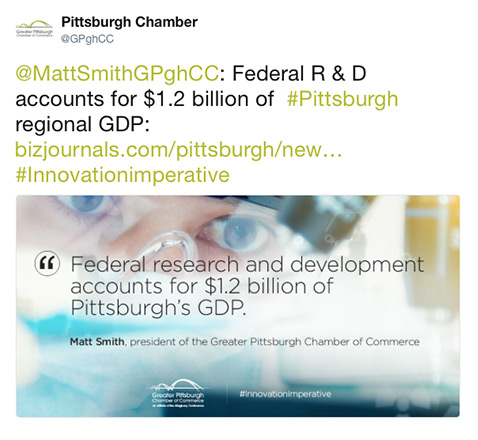 Released in 2017, New Americans and a New Direction: The Role of Immigrants in Reviving the Great Lakes Region, finds that immigration fuels population growth in the Great Lakes region, immigrants are keeping the region's workforce viable, and immigrants are playing a critical role in a number of sectors including manufacturing and healthcare and are fueling entrepreneurship that is driving job creation across the region. We worked with New American Economy to develop the report and participated in a panel on the importance of immigration to the Great Lakes economy at the WE Global Network's 2017 Convening in Syracuse, where the report was released.  You can read the full report here.

The GPCC's Brandon Mendoza appeared on Our Region's Business  with New American Economy's Kate Brick and All for All's Betty Cruz to discuss the report.

View the full interview below: 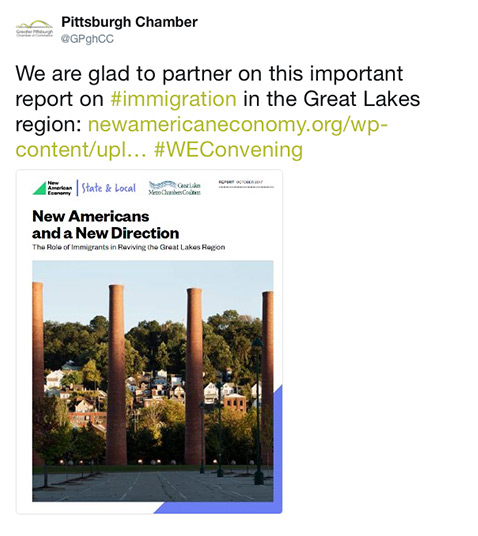